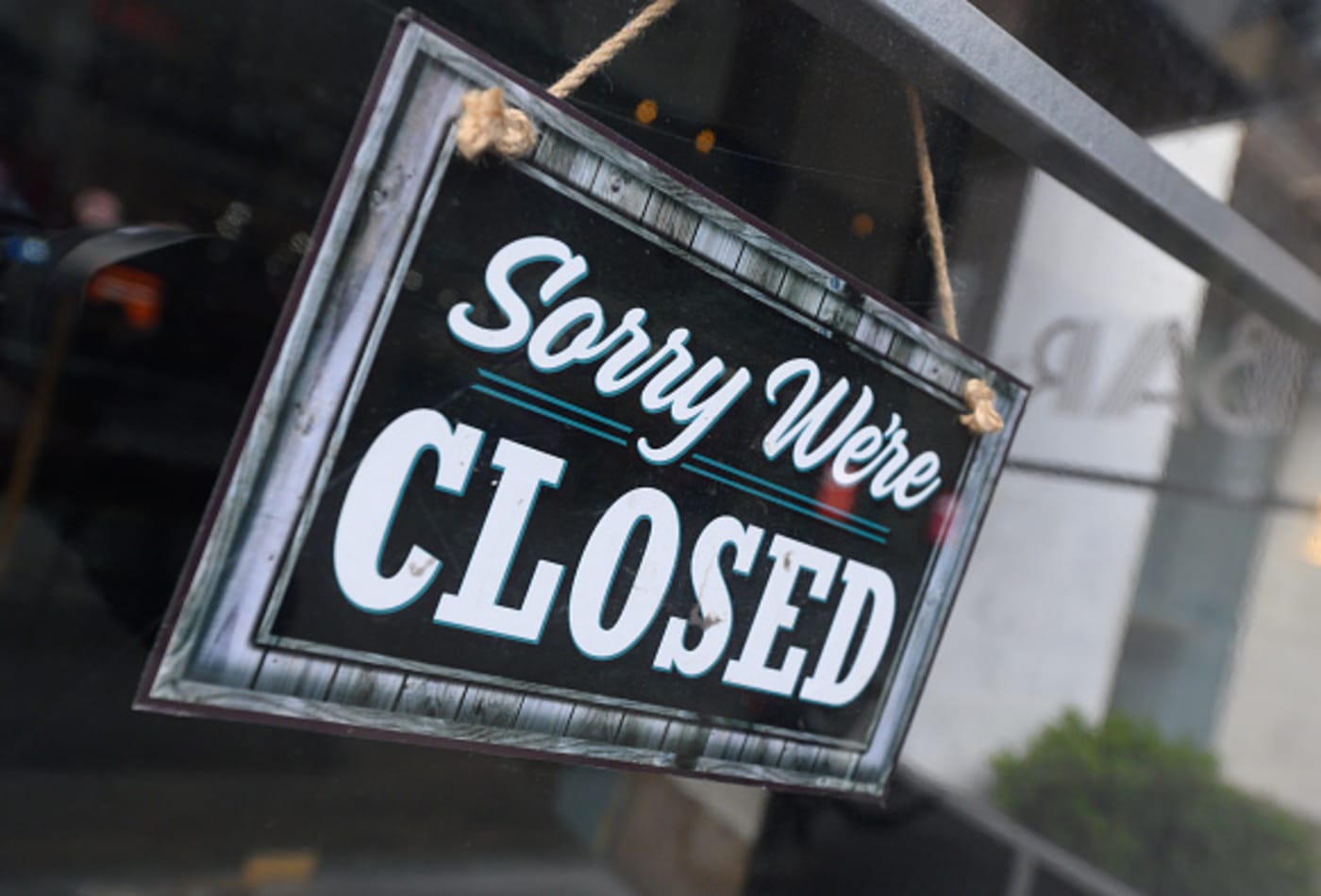 Small businesses in New York City are fighting for their survival amid the COVID-19 outbreak. After over a month without earning any revenue, many, including long-standing icons like Manhattan’s Strand bookstore, have laid off the majority of their staff. The independent bookseller has filed a request to be designated an essential business, so that it could take and fill online orders.

The Strand is just one of many well-known businesses and cultural institutions that may not survive COVID-19 pandemic and its economic repercussions – or that have already announced their closure, leading many New Yorkers to fret about a potentially devastating blow to the city’s character.

Here are some of the city’s icons that may permanently shutter as a result of the coronavirus.

It may not be the oldest bar in New York City, but 147 years in business is nothing to sneeze at. Since it first opened its doors in 1873, the Paris Cafe has been a fixture in the South Street Seaport in downtown Manhattan, just steps away from the East River. The bar and restaurant survived Hurricane Sandy in 2012, when the storm caused massive damage and flooding at the riverside haunt. Although it managed to come back seven months after Sandy, it seems that the coronavirus crisis proved too much to overcome. After posting an announcement on Facebook of its temporary closure on March 17, the owners announced in another post on May 3 that the Paris Cafe would shutter for good. The bar’s logo includes “Since 1873 till forever.” Unfortunately, it seems that forever has come sooner than anyone expected.

It doesn’t sell jewelry and you can’t get a massage there, the East Village bodega became a true institution in spite of its misleading name. A pack of smokes, cheap sunglasses, a bottle of Coca-Cola – you could get anything there, but what made it special were the egg creams, the poor man’s milkshake which is slowly vanishing from the city where it was invented. Gem Spa, on the corner of St. Marks and 2nd Avenue, had been in dire straits for a while in the high rent neighborhood, and tried to stave off closure by upping its influence on social media. But the coronavirus was the last straw, and the home of “New York’s Best Egg Cream” says it’s closing for good.

On the corner of 8th Avenue and 12th Street in Manhattan’s West Village stands a magazine shop that has managed to walk the tightrope between old and new. The signage – and the customer service of owner Mohammed Ahmed – fit a previous decade, maybe the 1940s, but the inventory gets updated daily, with some 2,000 magazines from the mass-market to the ultra-niche. But a loss of customers during the coronavirus forced Ahmed to temporarily close the shop and he’s created a GoFundMe to stave off permanent closure. Capitalizing on its hip location, this shrine to the glossy page has also started selling t-shirts and prints to raise money.

Many museums are housed in former mansions, displaying the art and furniture of the rich and famous. Few are in decrepit, dimly lit apartments, documenting the lives of the poor and anonymous – but that’s what the Tenement Museum on Manhattan’s Lower East Side does. According to a report published by the public policy think tank Center for an Urban Future, the Tenement Museum is among the cultural institutions hardest hit by the virus. Its loss would be significant to many New Yorkers – especially the millions who trace their lineage to the Irish, Italian and Jewish immigrants whose first New York homes were tenements in Lower Manhattan. But, according to The New York Times, with 75% of its $11.5 million annual operating budget coming from admissions and gift shop sales, the museum will struggle to survive the pandemic. Founded in 1988, the museum consists of two buildings, on which it owes $9.5 million in mortgage loans, costing $50,000 per month. The buildings include about a dozen apartments, for which the museum must continue to pay for maintenance even if the tenants cannot pay their rent. The institution cut monthly payroll for its 67 full-time and 75 part-time workers, slashing it from almost $700,000 to $100,000. Recently, the institution laid off all of its 75 part-time employees and reduced its full-time staff from 67 to 51 workers, of which only 15 are currently on payroll. While the museum had to cancel its April gala, it asked supporters to purchase virtual tickets and tables. The museum has also received donations from supporters, a $250,000 emergency grant from the New York Community Trust’s $75 million COVID-19 impact fund and it applied for the CARES Act loan from the U.S. Small Business administration. Tenement Museum President Morris Vogel is currently amping up the museum’s online programming, adding a digital exhibit on the census, a craft-making program for children inspired by former tenement residents and educational materials covering the pandemic. However, it remains unclear whether the museum’s efforts are sufficient to curb the crisis. Even after reopening, Vogel expects an ongoing drop in revenue due to decreased tourism.

The 30-year-old improv group, which has long served as a home to up-and-coming comedians, is planning to close its permanent theater in Hell’s Kitchen and its training center on Eighth Avenue. The organization formed in the 1990s and soon grew into a comedy hub and launching pad for A-list comedians, including Ellie Kemper, Aziz Ansari and Kate McKinnon. The pandemic closure is the final straw, after years of successive struggles to pay rent, property taxes and other expenses. The group had moved to its Hell’s Kitchen location following the closures of its Chelsea theater in 2017 and East Village location early last year. In 2018, the theater also laid off its New York-based staff members and increased ticketing prices amid financial challenges.

The Irish pub, a multiethnic gathering spot in Washington Heights, Manhattan, recently announced it would not be reopening, due to the pandemic. The bar and restaurant, which first opened in 1985, was a sanctuary in a neighborhood tormented by violence and the illegal drug trade during the 1990s. Its guests included Dominican Americans, African Americans, Caribbean Africans, Irish Americans, Jewish-German refugees, off-duty NYPD officers and medical workers from nearby Columbia University Irving Medical Center, the largest campus of NewYork–Presbyterian Hospital. Coogan’s nearly closed in 2018, after its landlord, the hospital, demanded a $40,000 raise in the monthly rent. The two sides reached an agreement, with the help of Rep. Adriano Espaillat, Manhattan Borough President Gale Brewer and Luis A. Miranda Jr., a political consultant and father of a Broadway star. However, now the time has come for New Yorkers to bid farewell to Coogan’s. According to The New York Times, the bar’s owners convinced a beverage supplier to take back cases and kegs of beer to meet the last payroll.

One of the oldest and biggest comic book stores in New York City, a few blocks from the Strand, Forbidden Planet may close permanently. Since its opening in 1981, the science fiction emporium has occupied three different locations on the same block, just south of Union Square. Due to its closure amid the pandemic, the store has not made any revenue in a month, according to Jeff Ayers, Forbidden Planet’s general manager. Despite having transitioned to online mailing, the store is struggling to pay its expenses. Income accrued from online orders is projected to cover only a small portion of the amount that is needed for the comic store to reopen. Ayers recently launched a GoFundMe site to support the business, which raised $29,500 of their $300,000 goal in a single day.

Saved by Mayor Bill de Blasio in January, the historic 19th-century bar in Woodhaven, Queens is once again on the cusp of death. Known for its cameo in the 1990 mob classic “Goodfellas” and the 2011 film “Tower Heist” with Ben Stiller and Eddie Murphy, Neir’s Tavern seemed destined to close at the beginning of the year, due to increases in rent and other costs, until de Blasio stepped in. The mayor facilitated a handshake deal for a new five-year lease between bar owner Locyent Gordon and building owner Henry Shi. The city’s Department of Small Business Services also gave the bar a $90,000 small business grant to keep the establishment alive. With the closure of restaurants mid-March, Neir’s Tavern began offering take-out and delivery service. However, Gordon decided to close the business for the month of April, to protect guests and staff. According to Gothamist, Gordon applied for relief funds and asked Shi for two months’ rent forgiveness in hopes of reopening.

The fine dining restaurant in the West Village shut its business after 36 years of service. Last summer, the upscale American restaurant, marked by chef Adam Portale’s 34-year tenure, hired a new chef, Victoria Blamey, hoping to attract younger diners. Chef Blamey received a three out of four-star rating from Times restaurant critic Pete Wells. However, despite good reviews, including Michelin stars and James Beard Awards, Gotham Bar & Grill experienced financial hardship. A spokesperson for the restaurant told Eater, “The situation created by the coronavirus has made the operation of the restaurant untenable.”

After 31 years in business, SoHo restaurant Lucky Strike is closing. Keith McNally, the owner of the French-American bistro, who himself had COVID-19, told Grub Street that the COVID-19 pandemic made its financial situation impossible to fix. According to a statement on its website, the restaurant stopped offering take-out and delivery options as of March 22 in the “interest and well-being of its customers and staff.” In a 2016 interview with Eater, McNally cited the eatery’s financial troubles, indicating Lucky Strike did not make “any money.”

With reporting by Jeff Coltin